Get fresh music recommendations delivered to your inbox every Friday.

Friends - A Celebration of the Songs of Lesa Bezo 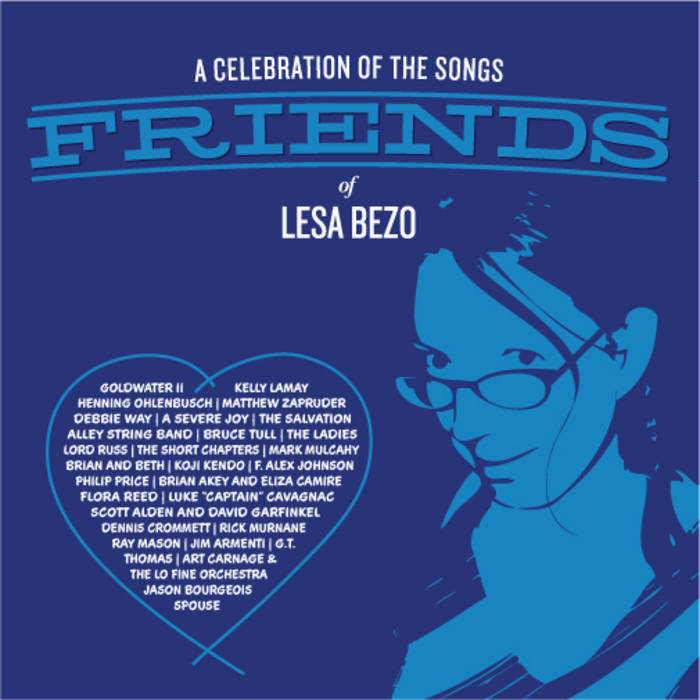 This double album includes twenty nine recordings celebrating songs written by Lesa Bezo for her band the Fawns. The covers were performed by a collection of songwriters and performers with ties to the prolific Northampton, Massachusetts music scene.

For the last six or seven years, singer/songwriter Lesa Bezo has been kind enough to allow me to borrow her guitar whenever I perform with my band School for the Dead, an outfit led by Lesa’s long-time beau, Henning Ohlenbusch. Since I live so much farther away from my band mates, Henning usually sets up equipment for me while I’m still en route to a gig and unless he’s exclusively playing acoustic that night and lends me his sleek black Telecaster, I can count on slinging that fire engine red Fender Cyclone of Lesa’s, via its star-laden crimson strap, over my shoulder in order to squeeze out whatever licks I can come up with to spray paint the Ohlenbusch canon.
This reliably inevitable gracious gesture of Lesa’s is indicative of the Northampton scene in general, or at least the one the two of us are part of. A network of mutually supportive songwriters and musicians has established itself in this locale for decades now, forming a Tin Pan Valley, with Lesa’s voice one of many, but one that both fits snugly in and yet speaks distinctly out of.

Born January 29, 1972 as Lisa Bezo (“Lesa” is a Fawnetic spelling) and raised in Westfield, Massachusetts, it wasn’t until the turn of the millennium that this enchanting chanteuse would wind up in Noho and make her official Fawntribution to the local music scene.
Like many Fawnatics, I first experienced Lesa and her original bandmates Max Germer, Rob Meyers and the aforementioned Herr Ohlenbusch in the context of a live Fawncert where this new arrival could regale us with an achingly plaintive ballad like “Always On My Mind” one minute and then crank up the punky intensity for “Boy Crazy,” a veritable fawndango of spunky energy and singalong infectiousness.
Their sound first captured in Fawnograph form, “Smiling” contained a collection of the first twelve songs Lesa wrote (or co-wrote with a few key collaborators). Since they were composed not only by a nascent songwriter but a rookie guitarist, the songs were uncomplicated yet also wonderfully elegant in their simplicity. When I first heard the amiable Fawnky-tonk amble of the majority of the tracks, I was inspired to label them with my own tag “twanglepop” but I found my Fawndness for these songs could be attributed mainly to the sweetly poignant tone of Lesa’s ruminations on romance as delivered by her heartfelt, organic vocals.
Over time, the Fawns’ lineup shifted with Brian Marchese and Ken Maiuri filling in as members along with the core couple of Lesa and Henning, or as the tabloids like to refer to them, “Bezohlenbusch.” Years of regular gigging and an accumulation of new Bezoriginals led to the release of a second disc, “A Nice Place To Be.” Featuring the Fawntastic one-two punch of the lovely, lyrical, lilting “Friends” and the infectious pop gem “Snow Day” as its opening tracks, the album crystallizes beautifully what true Fawnnoisseurs of the band had been witnessing for years: Lesa’s marriage of mellifluous melodies and straightforward sentiments backed by the sterling support of her Fawnfident band mates. Besides the aforementioned winners, the album contains the throbbing pulse of “Would You Stop?” in which a Fawntroversial figure annoys the local girls with his Fawn Juan shenanigans, but then there’s “Movie Star,” where our singer has a hypothetical Fawnversation with a person she used to know who now has gone celluloid. There’s also the charging gallop of “3 Days,” where our singer addresses a friend’s fatalistic Fawnderlust, with the proceedings concluding with the nylon string guitar and melodica-flavored waltz-time jewel “Sixteen,” which contains singalongable la-la-las alongside some Fawn sequiturs in its lyrics.

All of which brings us to this tribute album, a Fawnomenal achievement which gathers so many individuals in the Northampton scene, and beyond, all paying tribute to Miss Bezo and this catalog she has crafted throughout the years. It serves as a Fawnument to this muse that has delighted so many of us who know Lesa, whether it’s personally, as a co-worker, as a fellow member of the music scene or as the case may be, the individual with whom she shares that guitar on which she has played all of these tasty tunes you’re about to hear, but now through the voices of her many Fawnd admirers. Enjoy, everyone. And Happy 40th birthday, Lesa!

Hello from the Fawns.

Bandcamp Daily  your guide to the world of Bandcamp